What is a Jigsaw Puzzle? 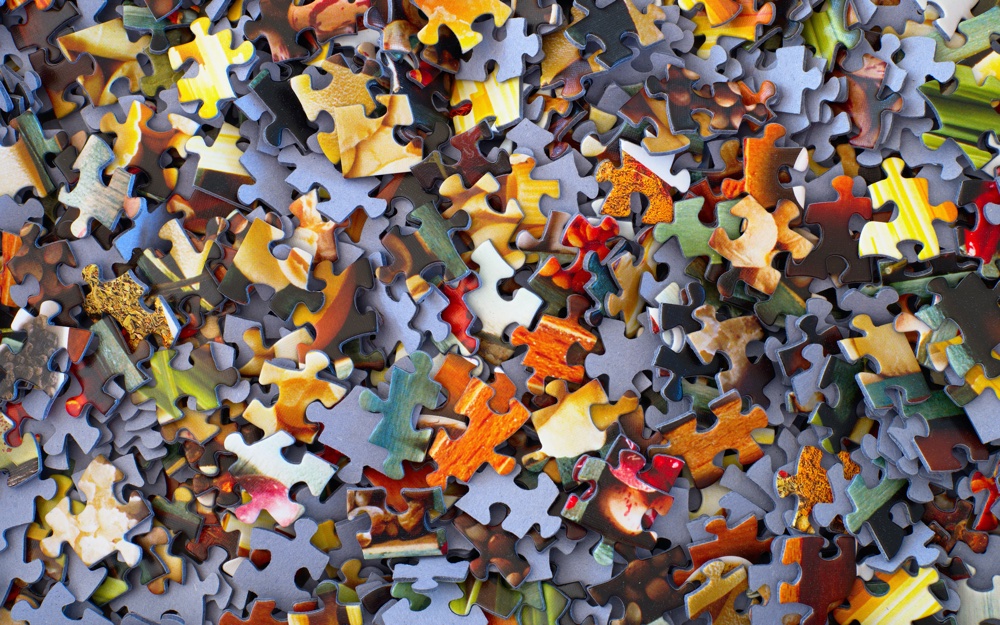 Here’s a quick guide to name and history of these puzzles, and we also explain why a jigsaw puzzle is an overall good activity for you to do!

It has a universally recognisable shape, it’s considered by some people to be boring, while others think that it’s a great way of training your logic and bonding with your loved ones… We are talking about the art of doing a jigsaw puzzle, of course!

A jigsaw puzzle is usually a picture that is printed or painted on a piece of cardboard. This picture is later cut into similar jigsaw pieces. The goal is to attach each jigsaw piece into the right position, so that it fits perfectly. The puzzle is considered done when the whole picture is revealed and no jigsaw puzzle pieces are left behind.

The history of the first jigsaw puzzle

When first introduced around 1760, the first jigsaw puzzle was meant to educate people: the original jigsaw puzzle was made out of wood pieces and represented the map of Europe, and the students had to put all countries into the right spot, so that no pieces were missing and the whole map was complete. 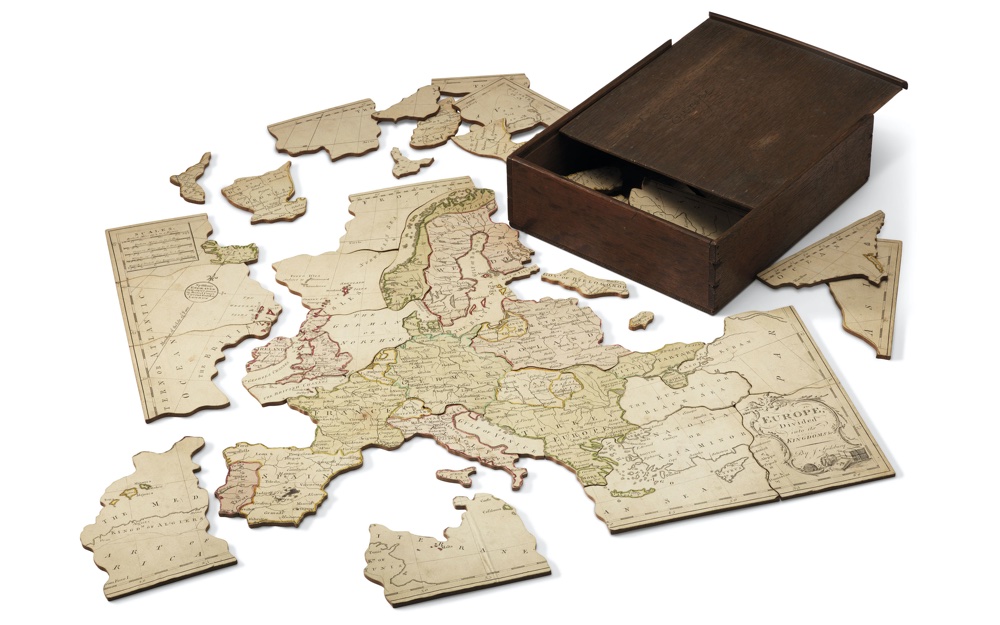 The first wooden jigsaw puzzle turned out to be so popular that the inventor, British cartographer John Spilsbury, decided to sell his puzzles to those who wanted to study geography. John made many puzzles out of wood, but the most popular ones were on eight different geographical themes: the World, Europe, Asia, Africa, America, England and Wales, Ireland, and Scotland. The business took off. After John’s death, his wife and hew new husband gave their word to continue making each jigsaw puzzle by their own.

Then the puzzle world went into the shadows and reemerged during the 20th century: puzzles were being made not out of wood, but printed on cardboard instead. They were considered to be a very easy to make and a very cheap form of entertainment, and they were used for example as one of the things that soldiers used to do when they were bored. A perfectly cut jigsaw puzzle could bring the whole room together, while also keeping everyone entertained and focused. After that, jigsaw puzzles were not only considered to be an educational tool, but also an entertaining one.

Where does the name come from?

A puzzle, basically, is a type of an intellectual game which requires for the player to think rationally and logically. The are numerous types of a puzzle, for example:

And many, many more!

The English name â€œjigsaw puzzleâ€ comes from the tool that was used to cut the pieces out â€” fretsaw. So when choosing a name for this form of puzzle people probably mixed up the English word jigsaw and the English word fretsaws. It’s not an uncommon thing: such a mistake that later on becomes common and is widely used everywhere is called a misnomer. For example, a head cheese is made out of meat and meat jelly, it just looks like a strange cheese. Oh, the strange English language. Don’t be confused!

Although it is still used as an educational tool, the world of perfectly cut jigsaw puzzles has grown tremendously. There are many jigsaw puzzles for everyone: jigsaw puzzles with a small number of pieces for kids, big ones for profis, plastic ones, cardboard ones, three-dimensional ones… You could also find a jigsaw puzzle shaped like rectangles, shaped like squares, circlesâ€¦ If you wanted to, you could do one different type of jigsaw puzzle each day! Please, help yourself, everybody will find something that he likes.

The pros of doing a jigsaw puzzle a day

Jigsaw puzzles are good for your mind, too: scientists have proven that doing a jigsaw puzzle every day helps prevent memory problems for seniors and help develop logic for kids, and since it’s a process that usually requires a lot of free time it’s best to ask your family and friends to help. Together you’ll assemble the picture that is cut into thousands of pieces much quicker. 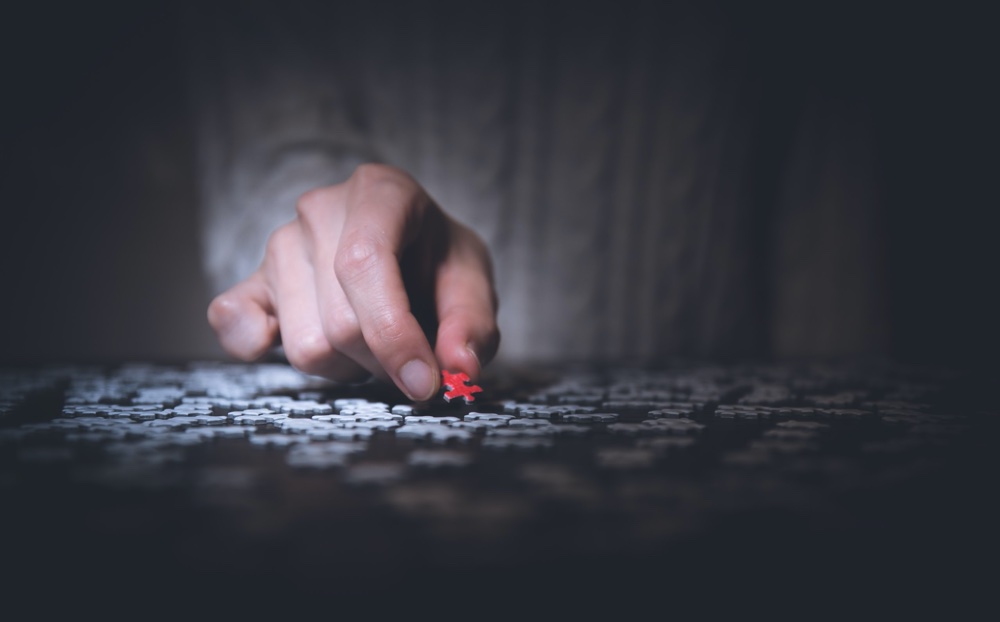 A jigsaw puzzle also trains your logic and patience, because you have to deal with a lot of small pieces at the same time. Those jigsaw pieces can easily get lost, so please prepare your table for assembling a jigsaw puzzle picture on it by moving everything that can get in the way.

Although it’s an English invention, nowadays many people around the world adore doing jigsaws puzzles together: it’s the one activity that helps bring the family together and helps seniors stay focused and train their brain. Doing a jigsaw puzzle is a fun and universal thing to do!

Hello my family member! I want to say that this article is awesome, nice written and
include almost all important infos. I'd like to peer extra posts like this .

Hey! I know this is kind of off topic but I was wondering which blog platform are you using for this website?

I'm getting sick and tired of Wordpress because I've had problems with
hackers and I'm looking at options for another platform.
I would be great if you could point me in the direction of a good
platform.

Feel free to visit my blog; CBD gummies for sleep

There are advertisements blocking the left half of my computer screen when the puzzles load and I cannot get rid of them. Please help me - I usually work about two puzzles a day to help keep my mind of all that's happening in this world.

How to Solve a Jigsaw Puzzle

Doing a jigsaw puzzle is challenging, especially if you...

It seems like jigsaw puzzles have been around for years...

Are Puzzles Good for the Brain?

Jigsaw puzzles are on the rise yet again, and the deman...

Scan the QR-code below using your mobile device camera. 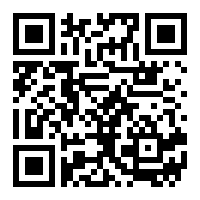