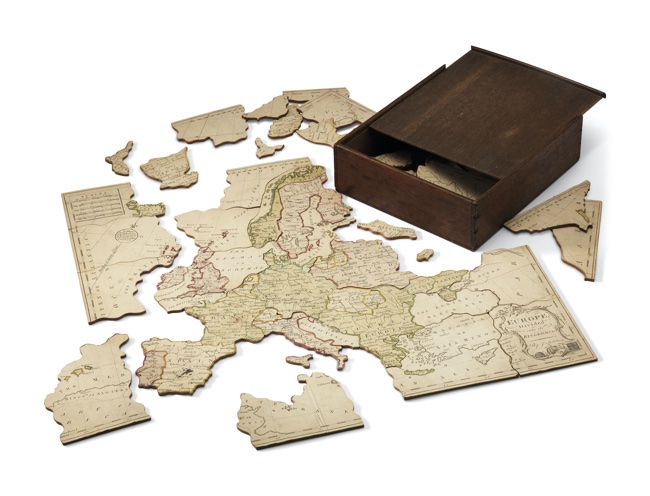 The first jigsaw puzzle ever

The first jigsaw puzzle that he made was a wooden puzzle that represented the map of Europe. He cut out European countries out of a map made out of wood and later used them to help children study geography. Spilsbury used a saw to dissect the parts.

He was the first one to name them, too – he called them “Dissected Maps”. These dissected maps were so popular that Spilsbury started selling them, creating new versions of the jigsaw puzzle maps of Africa, Asia, America and other countries and continents.

The cut out of wood jigsaw puzzles trend was a winner. John Spilsbury continued carving his jigsaw puzzles pieces until he passed in the year 1769. His wife Sarah May and later on her second husband Harry Ashby, who also was John’s apprentice, continued running the Spilsbury’s jigsaw business.

The rise and fall of wooden puzzles

Let’s rewind to the beginning of the 20th century. Suddenly, wooden puzzles were not only a studying tool, but a trending leisure time activity.

By the year 1908 everyone became obsessed, but jigsaw puzzles had to be made out of wood and carved one puzzle at a time, making the price of them quite high. A typical jigsaw puzzle back then cost around $5, and if we were to convert this price to real-time currency, each jigsaw puzzle would cost around $135. That’s quite a lot for a puzzle, and that’s why they were considered an upper-class hobby.

As the time went by, the jigsaw puzzle obsession grew – and it peaked in the year 1933. The Great Depression lead to an all-time highest unemployment rate, and jigsaw business owners saw an opportunity in that. Puzzles became cheaper, more and more people found themselves cutting them out of wood and selling them locally. Wooden puzzles were sold in quantities of 10 million puzzles per week.

The companies saw the trend for cardboard puzzles and rose to the occasion. A cardboard jigsaw became more popular than a wooden jigsaw, all thanks to the quick improvement of lithography and new cutting and dying technologies.

But wooden jigsaw puzzles, despite their low moments, are still here and still remain a more expensive, more unique type of jigsaw puzzles. They are usually hand-made, allowing the crafter to pick a specifically used type of wood for you, carve out your name, date of birth or anything you ask for right into the jigsaw puzzle pieces pattern. They are painted and cut specifically for you. With cardboard puzzles such a handmade experience usually is not an option, because they are made with a laser machine.

Since the 1960s both wooden and cardboard puzzles have transformed and grown, and now there are all kinds of jigsaw puzzles for everyone.

And a lot more!

How to Solve a Jigsaw Puzzle

Doing a jigsaw puzzle is challenging, especially if you...

It seems like jigsaw puzzles have been around for years...

Are Puzzles Good for the Brain?

Jigsaw puzzles are on the rise yet again, and the deman...

Scan the QR-code below using your mobile device camera.